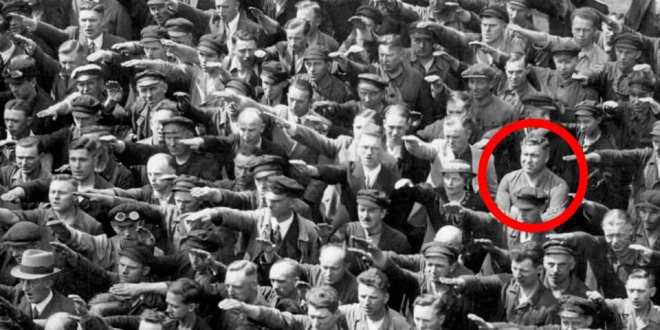 It is the height of arrogance to think that if I had been in the past I would have acted differently than the average individual of the time.

We all like to think we’d have been August Landmesser, the one man standing arms folded in a crowd of saluting Nazis. That we’d have been William Wilbeforce working tirelessly against the majority of Parliament to abolish slavery. That we’d be right alongside John standing by Jesus at the cross.

Fact is it’s more likely we’d have joined the heil-ing crowd at that rally, or at best been a “good German” who claimed not to support the Nazi regime, but remained silent and did not resist in a meaningful way.

We may have been a slave holder, or at least a supporter of the status quo. In Jerusalem we’d have been one of the oblivious worshippers, cried “crucify him” with the mob, or joined the disciples in fearful flight.

It’s true we might have been bold enough to stand out in any of these situations. But sinful human nature being what it is, we’re no different from the people of the past. So before we develop a sense of smug self-acquittal let’s evaluate our own response to modern, social moral failures. A healthy dose of humility is in order when we sit in judgment of the past.